The clank and clamor of iron and hiss of steam, the fizzle of arcana driven turbines and the heavy tread of iron-giants trudging through the streets. The world ruled under the Iron Kingdoms is a harsh one. There are many hidden alcoves, empty nooks and crannies secreted away within copper piping and metal junctions for evil and villainy to lurk. This is the world in need of heroes.

Blood and Steam is an experimental game I am going to be running from home after an arduous attempt to convert my favorite setting of Iron Kingdoms to 4E. The game is currently in planning and will be launched in September pending scheduling. The opening story will revolve around the happenings of The Witchfire Trilogy. If interest in the game continues after the first few sessions / levels then further adaptations for 4E will be made.

*Special thanks to Howietzer for the banner art! 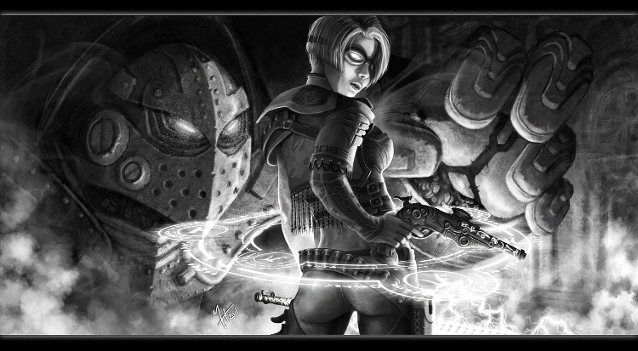 This has been an excellent source of go-to lore.

Under Healing, I assume that Nature = Primal?

This is looking very cool.

I'm sorry, but we no longer support this web browser. Please upgrade your browser or install Chrome or Firefox to enjoy the full functionality of this site.